We are very thankful to our Sponsors & associates

The Bristol Britannia XM496 Preservation Society is pleased to publicly thank the companies, organisations and individuals listed below for their valued assistance in supporting the Society.

Air Salvage International (ASI) is a globally respected provider of professional asset management services to banks, lessors, insurance companies and commercial airlines. With experience of over 700 projects worldwide over the last 20 years, our disassembly services have been at the industry forefront. We handle 14% of the global disassembly market annually – either at our UK Centre of Excellence, or airports across the world.

Cotswold Airport was formerly known as RAF Kemble and now is a very busy airport for microlights, general aviation, corporate aircraft and airliners. The airport is open to the public everyday, including weekends, and boasts a very successful restaurant that offers superb food and views of the runway from its south facing sun terrace.

Discover the amazing stories of those who have served in the RAF. Housed in our wartime hangars and in the National Cold War Exhibition you will find a fantastic display of aircraft and exhibits. Learn about the bravery of pilots in Test Flight and see the last surviving example of a Boulton Paul Defiant Mk 1 in War in the Air.

The Britannia Association has now disbanded but there are still many ex-members, both Royal Air Force and Women’s Royal Air Force, who were associated with the Bristol Britannia, that still wish to maintain contact not only with each other but also with Britannia XM496 ‘Regulus’. They currently meet once a year and also include time to re-new their acquaintance again with the aircraft.

Based originally at  RAF Lyneham and subsequently at RAF Brize Norton, the two Squadrons operated the Britannia from 1959 up to the aircraft’s military service retirement in late 1975. Today 99 Squadron is still extant, operating the C-17 Globemaster III from Brize Norton but 511 was disbanded early in 1976. The XM496 Preservation Society maintains a close relationship with Squadron members both past and present and has two ‘tame’ ex-aircrew members forming part of the ‘XM496 Working Group’ : Mike Sayer (99 Sqn Navigator)  and Graham Rutlidge (511 Sqn Captain).

Duxford Aviation Society (DAS) is a voluntary organisation which came into being in 1975 and is a partner organisation of the Imperial War Museum. 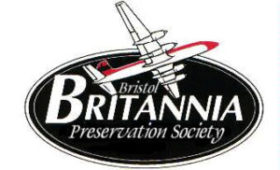 The BAPT is an organisation dedicated to the preservation of ex British Eagle Britannia 308F, G-ANCF named ‘New Frontier’. The aircraft is being virtually rebuilt on the site of the apron of the old Liverpool (Speke) Airport. The airliner will be painted in British Eagle colours and displayed on the ‘apron’ outside the preserved ‘Art Deco’ Terminal Building which is now the Crowne Plaza Hotel. Both the XM496 Preservation Society and Britannia Aircraft Preservation Trust have agreed upon a program of information exchange and mutual assistance.

Merlin Industries International, a  Gloucestershire based electrical contractor recently re-located to Cotswold Airport and is situated in The Old Boilerhouse at C Site. The Company is an NICEIC approved contractor (approved to BS7671) and a CIPHE member for plumbing and heating engineering. They offer a variety of inspections including PAT and EICR testing. The Society has contracted Merlin to carry out remedial electrical work on the Britannia and they very kindly offered us a sizable discount on the quotation because of our status as a ‘not for profit organisation’, for which we are very grateful. In view of the help promised now and in the future we have pleasure in declaring Merlin Industries International a sponsor of the Britannia. For a truly professional service please contact Simon Merlin on 07967 637546

Our sincere thanks to:

Stephen joined as a ‘Friend’ in 2017 and since then has been very generous in support of the Society. In addition to personally recruiting many new ‘Friends of the Britannia’ he has financed adverts in two popular UK aviation magazines, the Aeroplane Monthly and Flypast, which has brought in extra revenue and many offers of help from interested enthusiasts. The aircraft wash program introduced in early 2017 utilising a professional  company with specialised equipment, is also entirely financed by Stephen.

Mike, an ex Royal Air Force aircraft engineer, has been a long standing member of the Britannia XM496 Working Group. Together with his son Richard, he is frequently involved in hands-on technical tasks in the preservation aspect and display of the aircraft. At present he is constructing display cabinets for photographic records and provides these services free of charge. What is not generally publicised, is that Mike also generously makes a substantial annual monetary donation to the XM496 upkeep.

Jim, an ex Royal Air Force Britannia engineer, who all of us will concede is undoubtedly the most dedicated of the working members; giving freely of his time and expertise and frequently dipping into his pocket to fund necessary equipment and parts to ensure ‘Regulus’ still functions as a star attraction. Thank you Jim.

Brian, an ex 99 Squadron navigator, at the age of 88, very gamely decided to do a sposored 99 mile walk to request funds for the continued preservation of XM496. Apart from the revenue from membership fees, the advent of Covid 19 restrictions has reduced visitor revenue to zero and with the on-going closure of Cotswold Airport to the public, it looks set to remain the same for the foreseeable future. The minimum outlay required, without spending any money on aeroplane preservation, is £2500 to cover ground rent, utilities and liability insurance. Brian has raised sufficient to cover these costs and some, so we can survive for a year with the present status quo. Hopefully the situation will  improve. A very big thank you to you Brian …*you are a star*.

Mike is an ex-RAF Britannia Captain who met his wife Anne in the RAF at RAF Lyneham. They now live in Valla Beach, New South Wales, Australia, which is between Sydney and Brisbane. Mike recently featured ‘big time’ in the Friends Newsletter with the story of his life in the Royal Air Force. If anyone would like to read his memoirs please contact  Duncan Swift, the Newsletter Editor, on dna@dunavon.com and I will send you the relevant pdf copies. Mike and Anne have been very generous with donations to the Society and we would like to recognise their generosity with an entry in this column. Our sincere thanks.