Britannia 301, G-ANCA, in front of the Brabazon Hangar at Filton in July 1956 seen wearing the livery of Capital Airlines …a potential customer

November 1957 Bristol Britannia G-ANCA, a 300 series, was returning to Filton following a development flight when she crashed in what was then Bracey Wood (another source refers to the site as Lincombe Wood), avoiding housing and a school adjacent to the woods. All fifteen on board perished but miraculously nobody on the ground was killed. However property was damaged and an engine landed on the spot where normally a baby would have been asleep in a pram. Fortunately on that day the baby was not at home!

Fifty years later, on 3rd November 2007, several hundred people attended a commemoration arranged by Downend and Bromley Heath Parish Council. The present vicar, the Reverand Vicary and Richard Randall, author of the book Death of a Giant, gave speeches before Mrs Beryl Statham, the wife of Hugh the captain of G-ANCA. Mrs Statham unveiled a memorial plaque at the entrance to the crash site, now renamed Britannia Wood. Those attending included local residents, some of who remembered the day. There were also former Filton workers, as well as those such as myself, who serviced or flew Britannia aircraft and remember them with affection. Reverand Vicary described the recollections of people in the houses when G-ANCA hit their homes and of the ‘near misses’ some had. There were moving accounts of people whose lives would never be the same. He dealt well with the spiritual and social effects of the crash and left us wondering if the ‘hand of God’ was involved in preserving lives.

Richard Randall described what is known of G-ANCA’s final flight in a thorough and clear manner. He reminded us that a runaway autopilot was considered a possible cause of the manoeuvre that led to the crash and of the skill and airmanship needed to avoid loss of life on the ground. I spoke to him afterwards as I recalled an occasion at RAF Lyneham when a crew reported a runaway autopilot on approach. It went nose up and had to be disengaged for landing. After two hours of testing another fitter and I could not replicate the fault. However, we gave it one more try and lo and behold it ran away nose down! Mr Randall thought it possible that the pilots autopilot cut-out was fitted subsequent to the Downend crash. 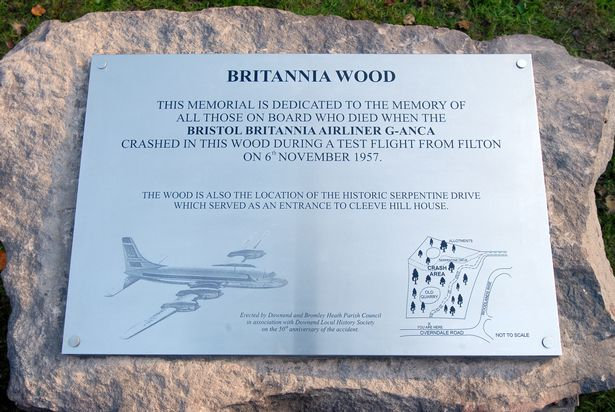 Mrs Statham spoke warmly of her husband and his generosity, recalling that he would always say yes if somebody asked if they could have a trip with him. However on that day in November 1957 he said no. When she first heard that an aircraft had crashed, she knew it was her husband’s. Following this loss, Mrs Statham found that her faith helped to sustain her through the mourning for her lost companion.